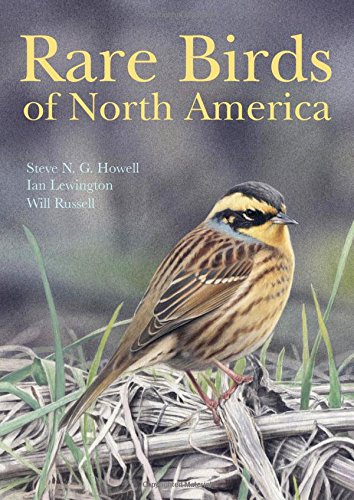 “Who is Rare Birds for? It’s not a field guide in the traditional sense. Ten inches high and weighing more than two and a half pounds, this is a book you’d think twice about carrying around all day, even if you are birding on Attu. There’s no denying, though, that the identification texts here are probably the most advanced ever produced in a North American guide. This is an invaluable reference, more at home on your bookshelf or on the dinner table during a birding trip than in your day-pack.”

Rare Birds of North America is the first comprehensive illustrated guide to the vagrant birds that occur throughout the United States and Canada. Featuring 275 stunning color plates, this book covers 262 species originating from three very different regions–the Old World, the New World tropics, and the world’s oceans. It explains the causes of avian vagrancy and breaks down patterns of occurrence by region and season, enabling readers to see where, when, and why each species occurs in North America. Detailed species accounts describe key identification features, taxonomy, age, sex, distribution, and status.

Rare Birds of North America provides unparalleled insights into vagrancy and avian migration, and will enrich the birding experience of anyone interested in finding and observing rare birds.