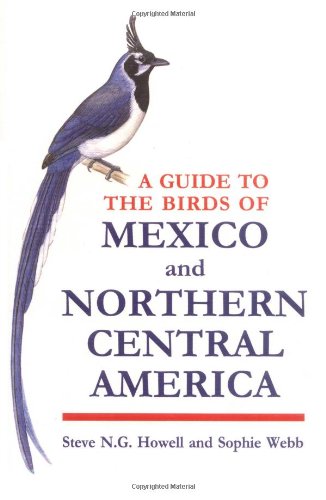 “A truly great field guide and a groundbreaking work that tackled many tricky and unstudied identification challenges for the first time. Sophie Webb’s illustrations are beautiful.

The chief drawback of this guide is the heavy size; it’s not something a birder is going to carry around in the field. It also has a separation of plates and text, which makes for a lot of flipping pages.

The pluses of this book are many, including the depth of coverage of many species, including basics of behavior, habitat, habits, plumage sequence, molt and geographic variation.

As with any work, this one has aged and in some cases the information now seems a bit dated; but this book has aged better than most and remains an essential companion for anyone visiting Mexico or Guatemala. It is useful down through Nicaragua and even to Costa Rica.”

When Steve Howell first visited Mexico in November of 1981, he arrived armed with a strong background of birding in Britain and the Western Palearctic, and an even stronger enthusiasm for the diverse and exotic birds of Northern Central America. But he also arrived without an adequate field guide. Indeed, to his surprise, he found that relatively little was known (and even less written) about the myriad of bird species that inhabit the region stretching from the U.S.-Mexican border to Nicaragua. And so, after eleven years of research in northern Central America, and with the essential collaboration of Sophie Webb–a biologist and one of the most talented ornithological illustrators working today–we now have the definitive guide to birds of this fascinating region. drop rest as varied as the Laysan Albatross, the Blue-footed Booby, the Collared Trogon, even the rare Guadalupe Storm-Petrel.

A Guide to the Birds of Mexico and Northern Central America is astonishingly comprehensive, covering the identification, status, and distribution of all 1,070 birds species known from Mexico, Guatemala, Belize, El Salvador, Honduras, and western Nicaragua. No other book approaches the thoroughness of this unique field guide. Beautifully illustrated with seventy-one color plates and thirty-nine black and white drawings, the guide shows 750 species and includes many plumages never before depicted. Of special interest are illustrations of some of the most notoriously difficult groups to portray, such as raptors in flight, owls, and nightjars. In addition, superb, easy-to-read maps help the traveling birder locate particular–even rare–species, and the entries describing individual birds detail their appearance, voice, habitat, behavior (including nesting and eggs), and distribution. With the U.S. birder in mind, the guide also includes birds that can be seen north of the border, showing these American migrants on plates when they could be confused with similar Mexican species, thus enabling the birder to make quick and ready comparisons in the field. And, with readable and fascinating presentations of the natural history of Central American birds, this guide will be welcomed not only by seasoned birders, but by any traveler exploring the rain forests, coastlines, and deserts of Mexico and the Central American isthmus.

Sponsored by the distinguished Point Reyes Observatory in California, A Guide to the Birds of Mexico and Northern Central America is a wonderful addition to the library of birders, nature enthusiasts, and travelers alike. With its lavish illustrations, clear writing, and unprecedented range, it offers hours of compelling reading and pleasant browsing for anyone intrigued by the colorful diversity of birds and the wild, largely unspoiled world next door.