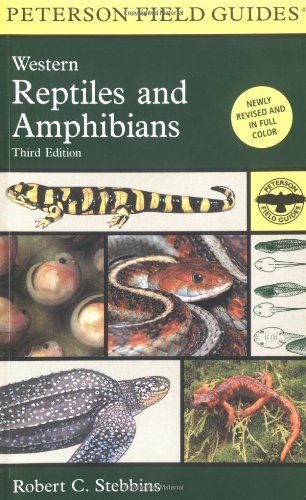 When Robert C. Stebbins published his masterful scientific illustrations of the Amphibians and Reptiles of Western North America in 1954 (McGraw-Hill), they raised the bar for the accurate and aesthetic depiction of western herpetofauna. His 1966 book A Field Guide to the Western Reptiles and Amphibians, published as part of the Peterson Field Guide Series, was considered the bible of the field and “…was illustrated with painstakingly detailed drawings he made during long treks in mountain and desert habitats at a time when most biologists were moving their research into the laboratory” (The New York Times obituary by Paul Vitello, 10/07/13). The third and latest edition of this guide (Stebbins, 2003) contains more than 650 color illustrations and photographs in addition to accurate range maps, which do a fine job documenting the species and subspecies as they were recognized at the time. The North American coverage of this guide ranges from the Pacific Coast to the eastern edge of New Mexico, Colorado, Wyoming, Montana, and Saskatchewan. The guide also includes the Baja Peninsula species that occur south of the Mexican border.

This field guide in its current form does have its limitations. Due to the many taxonomic changes since the guide was released 14 years ago, the taxonomy is significantly out-dated. This field guide follows the traditional Peterson field guide format that groups plates, species descriptions, and range maps in separate sections instead of the more typical modern format with a single spread for each species. This format may be perceived as a negative by some users, although it has its advantages. For example, when comparing features of different species or when studying the ranges of different species or subspecies. The Baja California coverage of the 3rd edition does not include the island endemics, which have become primary targets of herpers visiting the Baja region.

It’s hard to fault the beautiful illustrations, but the following comments are provided in the spirit of constructive criticism. Most of the snake illustrations are limited to the head, neck, and anterior portion of the body, providing a chopped-off view of the snakes presented side-by-side. Full body snake illustrations would be more aesthetic and in some cases show key differences in tail features. For example, rattlesnake rattles and terminal banding patterns.

Despite these limitations, this is still the best currently available field guide for the reptiles and amphibians of western North America. Robert Stebbins passed away in 2013 at the age of 98 after chronicling the herps of the west, which makes it uncertain if and when the content of this field guide will be updated. Or will this landmark field guide someday be surpassed by a future guide covering the western US and Canada, which would be a tall order indeed.