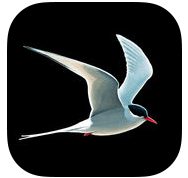 “I could find next to nothing that I didn’t like about the app; the main issue I discovered was that the species comparisons are evidently optimised for viewing on the larger screen of an iPad. On my iPhone 5s, the presented information appears very small for some species comparisons (Arctic, Common and Whiskered Terns for example), with the text unreadable when they are presented directly together in this way — something that would be curable with the introduction of pinching in a future version. Another minor (and slightly pedantic) point is that there are the odd snippets of out-of-date information in the text, and some of the British status codes are a little wayward — though these are problems stemming from the original text, rather than a fault of the app itself.”

The Collins Bird Guide App combines world-class illustrations and comprehensive information with intuitive design to create the ultimate field guide for passionate birders and casual birdwatchers alike. The app is based on the landmark book by Lars Svensson, Killian Mullarney and Dan Zetterström, universally acknowledged as the standard European field guide. This definitive work has been reimagined for iPad and iPhone by birders for birders.

The Collins Bird Guide App provides everything you need to identify a species quickly and learn about it thoroughly. Immerse yourself in the exceptional illustrations, maps, calls and concise text. Use the powerful search filter and curated confusion lists to focus in on a species. The Collins Bird Guide App is an essential companion always to hand on your iPhone, and available to browse in full glory on your iPad.

As well as the optional video library, the app incorporates British Trust for Ornithology/BirdWatch Ireland/Scottish Ornithologists’ Club Bird Atlas 2007–11 mapping data as an in-app purchase, providing the most comprehensive location mapping of any bird guide app.