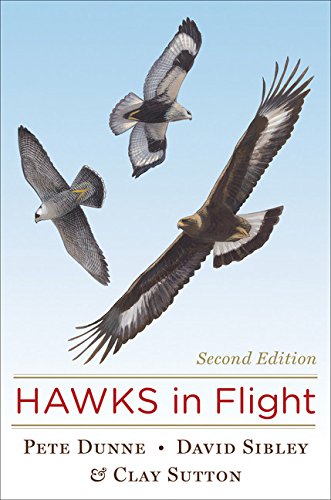 “Perhaps my favorite feature in the entire book is the “Putting it Together” section at the end of each chapter. This is a summary of the family of birds that puts everything together to get a better understanding of the types of birds. For example, the end of the Eagles and Vultures chapter has info on how to tell big black birds apart.”

Among the world’s most popular birds, hawks can be some of the most difficult birds to identify. They’re most often seen flying high above and at a distance.

In the first edition of Hawks in Flight, Pete Dunne, David Sibley, and Clay Sutton presented a holistic method of hawk identification, using general body shape, the way they move, and the places they are most likely to be seen.

The new edition of the book that Roger Tory Peterson called a “landmark” integrates an array of carefully selected photographs, David Sibley’s superb illustrations, and a clear, information-packed text and takes raptor identification to a higher level. This edition covers all of the raptors that breed in North America, including those with limited ranges in Florida, the Southwest, and Texas.

Picking up where its predecessor ended by including two decades of raptor identification refinement, Hawks in Flight summarizes and places in users’ hands an identification skill set that used to take years to master. The unique alchemy of Dunne, Sibley, and Sutton—including their collective experience of more than one hundred years watching hawks—make this book a singular achievement and a must-have for anyone interested in hawks.