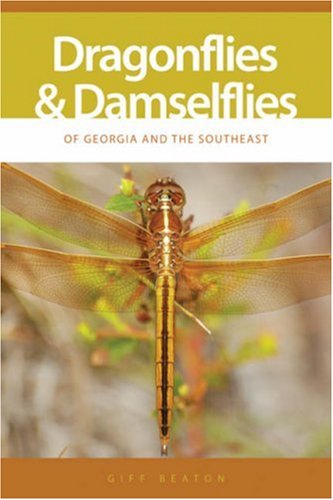 “Covering southeastern species found north of Florida, naturalist Giff Beaton’s guide is perfect for dragonfly enthusiasts living in Georgia and neighboring states. The text covers the 150 most common species in the region, many of which are found in the Mid-Atlantic States and Florida as well. Large color photographs make for easy identification, and the guide also includes information on flight seasons, range, similar species, habitat, and behavior.”

Review of the Dragonflies and Damselflies of Georgia and the Southeast (Wormsloe Foundation Nature Book)
March 3, 2016
FGR Team (FieldGuideReview.com)

Visit any pond on a summer day and the air will be alive with dragonflies and damselflies―shimmering aerobatic daredevils that dart above the water and even into nearby fields and woodlands. Organized for easy use in the field, this abundantly illustrated guide, with more than 400 color photographs, is the first to cover Georgia’s dragonflies and damselflies (odonates). It details more than 150 species―species that are also the ones most likely to be seen throughout the U.S. Southeast north of Florida.

The guide first explains dragonfly and damselfly body parts, taxonomy, life cycles, and habitats; discusses conservation issues; and offers tips on observing and photographing odonates. Later chapters, organized according to the ten odonate families, such as spreadwings, darners, spiketails, and emeralds, provide general family information followed by accounts of individual species. The beautifully illustrated species accounts describe general appearance and key identification features, distribution, habitats, life history and behavior, and conservation. Supplementary materials include suggestions for the best places to watch odonates in Georgia, a comparative listing of species’ level of endangerment, and the date range during which each species can be seen.

Odonates are easy to find and observe, and because they display an astounding variety of colors, sizes, and behaviors, they are popular with birders, butterfly watchers, and other nature enthusiasts. This guide will be welcomed by everyone who wants to learn about odonates and their habitats and what can be done to help protect them.

Included in species accounts:beautiful, detailed photos that show odonates from angles important to determining species, sex, or agecommon and scientific namesimportant features for field identification, with tips on distinguishing between similar-looking speciestypical behavior of the species, including breeding and feeding habitsoccasional commentary on taxonomy or other notable featurescolorful quick guide, with a range map, incidence information, sizing graphics, and flight period information